Madame de Staël called them "the region of the universe where volcanoes, history, poetry have left more traces". How much charm in a single strip of land! Rich in enchanting and magical places, it has never ceased to exert a great fascination on artists, writers, poets, travelers and scientists of all ages, keeping intact over the centuries all the suggestion of an illustrious past.

It is an eminently volcanic region, consisting of low-lying craters, some deformed and broken by the action of the sea. A scenery of characteristic hills, small lakes, marvelous panoramas, variety of shapes, brightness of the sea, celebrated belvedere. The land stands out for its extraordinary fertility and vigorous vegetation (chestnut trees and vines). The charm of this region lies in the force with which sea, sky and human works intertwine, composing an incomparable scenario. 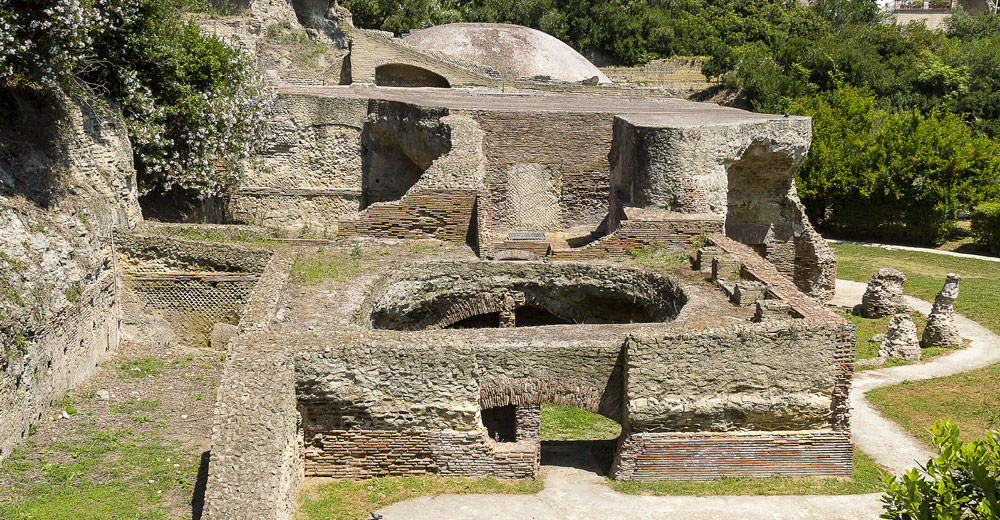 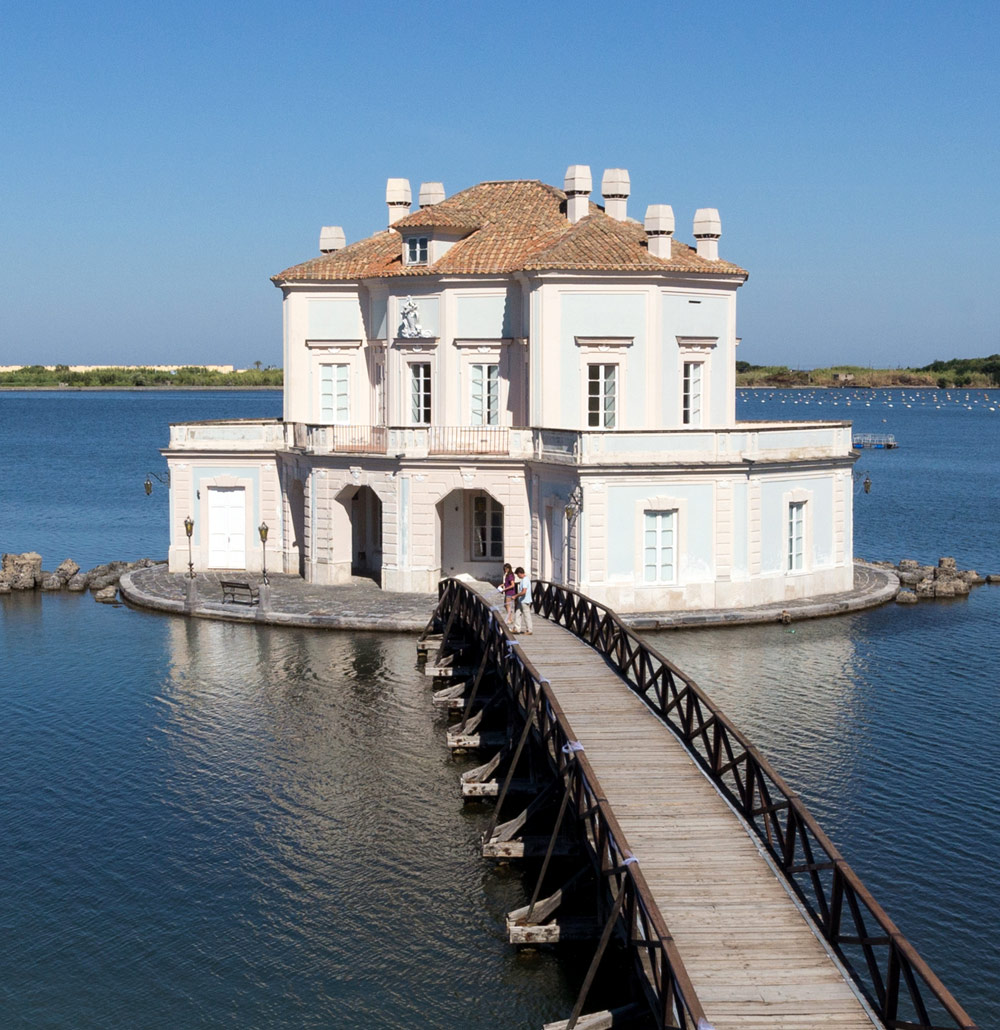 The Parco dei Campi Flegrei, a vast area between city and nature, extends to the North West of Naples and also includes Pozzuoli, Bacoli and Monte di Procida. The territory of the Park, strongly characterized by its volcanic nature, if on the one hand it scares man, on the other it is a source of extraordinary tourist wealth. On the western side of the Park, the landscape is enriched by the presence of various lake formations. Some are of volcanic origin, such as Lake Averno and the smaller Lake Lucrino, which is brackish in nature. On the other hand, the brackish Lago Fusaro and Lago Miseno are of lagoon origin.

Then again, Fuorigrotta with the thermal baths of via Terracina and Agnano with the ruins of the ancient Roman baths, the thermal establishment, the hippodrome, the engineering science center of the Federico II University of Naples, the Dog's cave and the Astroni crater with its WWF oasis.

The ancient city of Pozzuoli it is collected on a tufaceous promontory. It is an unparalleled tourist and commercial center that stands out for its favorable geographical position, for the historical tradition of a seaside and spa resort, for the grandeur and magnificence of its monuments, for its rebellious nature and its colorful harbor. In Pozzuoli, the cult of ancient myths lives again in festivals and shows, as in the event "The culture of the myth", organized in July and August with theatrical and musical events. The feast of the patron saint San Michele is celebrated on 29 September. The ancient origins and subsequent splendor of the town are evidenced by the presence of impressive architectural works: the majestic Neronian-Flavian amphitheater; the temple of Serapis; the temple of Augustus and that of Neptune, one of the largest spas in ancient Puteoli. Among the hamlets of Pozzuoli we point out Arco Felice, a land that releases an inexhaustible vitality: water, air, earth and fire have made nature generous, suggestive and welcoming. In this territory, myth meets reality by blending splendid legends with strong superstition.

An archaeological center of absolute importance, at the western end of the Campi Flegrei, is Cuma. Pole of culture and civilization from which the alphabet spread to the Peninsula, it is known for the famous Sanctuary of the Cumaean Sibyl. It had extraordinary monuments and was the scene of stories that archaeological research is progressively reconstructing. The amphitheater, the acropolis with its temples, the Sibyl's cave, the Roman Crypta, the Forum, the necropolis: in this archaeological city, which has gone down in history as the cradle of Greek civilization, it is possible to travel in time, listen to the fascinating voice of the past, of myth and culture.

The Solfatara di Pozzuoli it is located between the lake of Agnano and Pozzuoli. It is the locality of the Phlegraean Fields that presents the most evident phenomena of volcanic activity. It looks like a natural research laboratory and is now open to geologists' observation.

Today Bacoli it is the daughter of the urban development that took place in the second half of the twentieth century, but nevertheless still boasts the presence of villas rich in marble and mosaics that were built in the past. Its foundation is due to the ancient Romans who called it with the name of "Bauli". In addition to today's Bacoli, the current municipality also includes the remains of the ancient Bauli, the ancient Roman cities of Baia (whose remains extend as far as Fusaro), and again Miseno with the annexed Miliscola, seat of the praetorian fleet of the Roman emperors.

And as Orazio argued, "No gulf in the world shines more than the pleasant one Baia". Defined the French Riviera of Antiquity, Baia was the richest and most modern seaside resort in the whole empire, the scene of memorable events. The small town perfectly combines old and new. A seaside village, a seaside resort and an archaeological center of great importance, located in a picturesque location at the bottom of the cove of the same name. Its sites of interest are numerous: the Archaeological Park of Baia, the Temple of Diana, the Temple of Mercury, the Temple of Venus, the Castle of Baia, the Archaeological Museum of the Phlegraean Fields, the Archaeological Park of Baia, Capo Miseno which is an ideal place for all those who want to spend time immersed in nature, undertaking naturalistic trekking itineraries.

And to end our journey in the Phlegraean Fields, we look out from its terrace, Monte di Procida. This is the most extreme and panoramic part of the entire peninsula. A perfect combination of seascapes of rare splendor and ancient architecture preserved in the village of Cappella Vecchia. The islet of San Martino is a small private island, located in the municipality of Monte di Procida and accessed through a long and very narrow tunnel and a precarious pier. Originally this islet constituted a single promontory with Monte di Procida, but later, due to the tsunami, it broke away. The islet of San Martino is today a fascinating tourist destination, a pleasant, enchanting place. In its seabed rich in fish and seafood, diving is a must.

This website uses cookies to improve your experience while you navigate through the website. Out of these, the cookies that are categorized as necessary are stored on your browser as they are essential for the working of basic functionalities of the website. We also use third-party cookies that help us analyze and understand how you use this website. These cookies will be stored in your browser only with your consent. You also have the option to opt-out of these cookies. But opting out of some of these cookies may affect your browsing experience.
Necessary Always Enabled
Necessary cookies are absolutely essential for the website to function properly. These cookies ensure basic functionalities and security features of the website, anonymously.
Functional
Functional cookies help to perform certain functionalities like sharing the content of the website on social media platforms, collect feedbacks, and other third-party features.
Performance
Performance cookies are used to understand and analyze the key performance indexes of the website which helps in delivering a better user experience for the visitors.
Analytics
Analytical cookies are used to understand how visitors interact with the website. These cookies help provide information on metrics the number of visitors, bounce rate, traffic source, etc.
Advertisement
Advertisement cookies are used to provide visitors with relevant ads and marketing campaigns. These cookies track visitors across websites and collect information to provide customized ads.
Others
Other uncategorized cookies are those that are being analyzed and have not been classified into a category as yet.
SAVE & ACCEPT